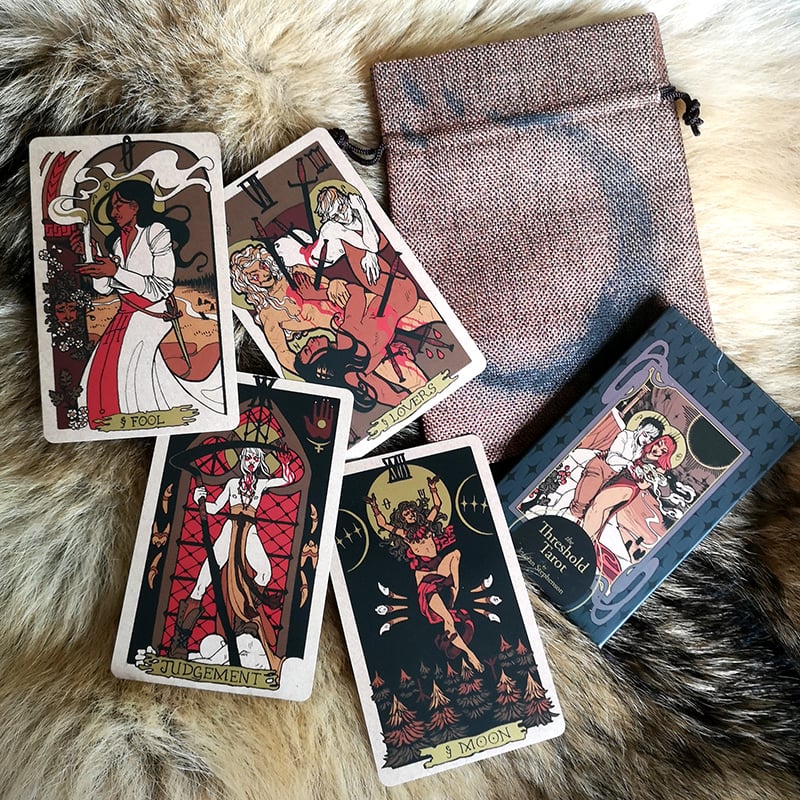 My long-awaited (by me), much-anticipated (also by me) foray into tarot. Thirteen years of consideration, magical work, and study, followed by three intensive months of sudden ripening and fruition. The Threshold Tarot is a major arcana following Crowley's process in the Book of Thoth. It is a magical tool for energy work, spellcraft, and internal exploration, but of course can be read for divination and guidance as a traditional tarot deck.

The artwork introduces and explores the notion of the tarot of a cyclical release of energy with the specific intention of changing the world or bringing a new one to the foreground. The major arcana are illustrated as real people (some of whom you already met in An Ode to Divine and Dirt), and their relationships to each other are reflected in the connections between the cards.

Privately printed on 300gsm recycled cardstock with Pantone metallic gold ink. Comes in a completely unique, hand painted burlap bag, which I have daubed with a mixture of my own spellcraft ink and ashes from my ritual fire. The deck is bagged in with a beautiful little A6 guidebook to explain the symbolic language used in the artwork, and some never-before-shared insights into the symbolism I use for all my artwork generally.

Strictly limited quantity! This is the only print run of the Threshold Tarot as a stand-alone major arcana that will ever be produced. Magic bottled at source for unrivalled purity and flavour.